We invite you to Night Harbor, photos by Georg Worecki. 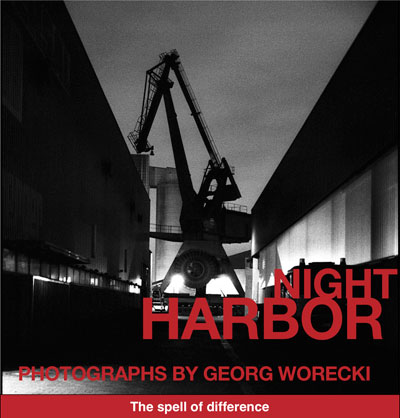 “Neuss, Germany. For half a year the Neuss harbor was a nightly aim of Georg Worecki. Within these six months he took over 1300 pictures. I do wish that these photographs touch particularly positive images and their underlying feelings, which are connected with the notion ” harbor “. With it Georg Worecki means, for instance, “to leave all known and devote oneself to the immediacy of strangeness, the spell of difference.” In fact these photos convey to ingrained citizens a different view of the Neuss harbor. All photos have been taken between 11:00 pm and 03:00 am. Flashlight was taboo. All pictures resulted only from long exposure times and the existing light of the lamps and neon signs. And who- ever thought that the sky is only black at night will see in these photos how bright the sky is by night over the Du?sseldorf region. Georg Worecki marvelously succeeds in capturing the melancholy of the dark side: the void, the cold autumn and winter weather, which one can feel nearly physically, the dark water, on which the lights of the ships and buildings are reflected. All seems to breathe out, to hold still after the hectic pace of the day. It is very interesting that even the cold, rain and dark helped him “to take pleasure in a certain aesthetic of this morbid industrial land- scape.” The artist is primarily interested in moods and aesthetics, which is detached also from classical industrial photography. The com- position is at the forefront, light-dark contrasts and the opposition of lines and areas are calculated indeed. Worecki pleasantly leaves out The spell of difference any straining after-effects like foreseeable corporate advertising. The scaffolds of the night-black cranes appeared spooky, illuminated factory windows are in contrast to high concrete warehouse walls. Many motifs, especially the details, could also be photographed in a completely different harbor. Georg Worecki goes his own way, “my way”, like the ship is called, which he discovered in the harbor. Worecki, born 1961 in Du?sseldorf, Germany, studied history of art & ar- chitecture, was trained as a director and is now working as a freelance photographer & filmmaker.”